I worked hard for my college degree at an accredited university. Although I was always a good student, there was a time in college when I thought I’d just scrap the whole plan. But I hung in there and finished it with honors. Didn’t mean I was guaranteed a job, but it did help pave the way. 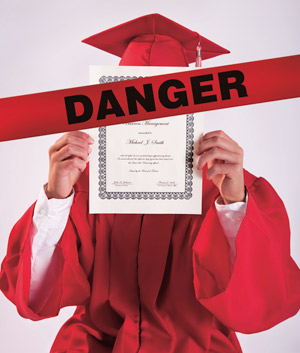 And I’m all for allowing non-US students attend our universities as well as non-US citizens to launch business ventures here that may create jobs.

So when I read a San Jose Mercury News report about a twist on the diploma mill epidemic – visa mills – especially in this still horrid economy, it’s frustrating and disheartening. Human resources must be extremely vigilant.

Unaccredited schools that had been paid millions of dollars by foreigners to obtain student visas that authorize them to remain in the U.S. — a scheme whose growth was fueled by a profit-sharing system that gave students who referred newcomers from abroad a 20 percent cut of the tuition, according to court records.

Entrepreneurism runs amuck in a black market, which is usually a big part of the legitimate business markets, and sadly the US government approves this currently.

A decade after terrorists in the country on student visas carried out the Sept. 11 attacks, the Department of Homeland Security — the very agency established to oversee a tougher visa system — endorses universities that should be ineligible to issue the necessary certificate for students to gain F1 student visas, records show. It even places these schools on the list that international students consult before pursuing a degree in the U.S. (Thankfully this is being investigated now.)

The students who attend these are attracted for another big reason: the promise of legal jobs. Unfortunately many of these students return home with little education, no accredited degree and broke. And for those who do get jobs, it’s at the expense of those who have been unemployed for months, even years now.

According to the SJ Mercury article: ITU contends that it meets federal criteria because its credits are accepted by recognized universities — but no proof was submitted. School officials asserted to the newspaper that their courses are accepted by San Jose State, Santa Clara, Stanford and the University of California system — a claim all the universities say is not true.

Diploma mills are mostly online entities that offer substandard or bogus degrees in exchange for payment and not much else. Often these entities will grant a “degree” based on the submission of a résumé detailing life experience, and will even let the applicant choose his own subject and year of graduation. Others might require the student to do some work, but because of the lack of recognized accreditation or authorization to grant degrees, the certificates are worthless.

Systems of higher education recognition and accreditation vary greatly across the globe, making it easier for diploma mills to confuse and deceive.

And we don’t have to look as far as our own backyards.

The Accredibase™ report identifies the following red flags that may help in the identification of diploma mills:

Again, it’s frustrating and disheartening that the path of least resistance can be so destructive.