A con man is accused of starting a fake university and churning out fake diplomas – while in prison.

Kenneth Shong, 45, who is currently serving time in a Wisconsin prison appeared in court on Tuesday to face a fraud charge, years after the complex scheme was uncovered.

He is alleged to have worked with associates outside the prison walls to operate a suspected diploma mill that was recruiting students for at least two years before investigators caught on.

Shong, described by a judge in 2005 as having a history of ‘outwitting, outplaying and outlasting authorities,’ was set to be released from prison last Saturday on a forgery conviction.

He was instead taken into custody and charged Thursday with fraudulent writings in Winnebago County. A hearing to determine whether he will stand trial is scheduled for Jan. 19.

His public defender, Katena Roberts-Turner, did not immediately return a call for comment Tuesday. If convicted, Shong – whose criminal past dates back two decades and includes fleeing the US – could face up to six years in prison and a $10,000 fine. 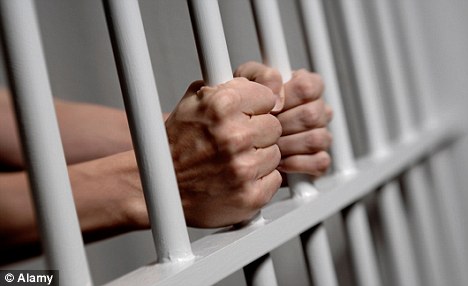 According to the criminal complaint, Shong was at the Oshkosh Correctional Institution in 2006 when he encouraged another inmate, Kenneth Fleming, who wanted to become a paralegal, to enroll in ‘Carlingford University.’

Shong allegedly said the school was accredited, incorporated in Delaware and Alabama and degrees were granted through their London campus.

Fleming later arranged for his mother to send a $1,740 tuition payment to a post office box in Mobile, Alabama.

Back in the clink: Shong was already in prison for fraud and tax evasion charges. He faces up to six more years behind bars

The complaint said the inmate became suspicious of ‘poor business practices and unresponsiveness’ in relation to the school returning his grades and giving further lessons.

The inmate later learned the university was not incorporated in Delaware and Alabama and complained to the state in 2008.

Two other inmates from the Oshkosh prison also complained about the ‘university’ and Shong, who has several aliases, including Kenneth Onapolis, investigators said.

The complaint also noted that Carlingford University’s website had statements that were misleading and erroneous.

Shong also had convicted sex offender David Kaster, whom he met in prison, help him start a post office box in Green Bay after Kaster was released that Shong used to claim he had a Green Bay “Regional Training Center,” according to the complaint.

Shong transferred to the Racine Correctional Institution in the fall 2007, and officials there began getting suspicious of his activities and started to investigate.

The Wisconsin Educational Approval Board determined that Carlingford University was operating in Wisconsin without necessary approval, and issued a cease-and-desist order. The Department of Justice’s investigation is ongoing.

Charges took so long because the case was complex and was recently reassigned to a new prosecutor, said Justice Department spokeswoman Dana Brueck.

Shong’s criminal past includes convictions for bank fraud, theft and other financial crimes. After years on the run, he was captured in 2002 by US marshals in Vanuatu, a small island near Australia, and returned to the US to face federal fraud and tax evasion charges.

When that prison term ended, Wisconsin authorities brought him back to finish serving a 12-year sentence on a 1989 sentence on forgery charges. He had escaped while on parole in 1993.

She called him ‘a professional con man’ and said his shady business activities were continuing in jail.

‘I’m not so certain the public is safe even with him in prison,’ she said.