Coming down heavily on racketeers involved in fabricating fake degrees in the capital, police have arrested four persons, including the syndicate kingpin who is a Delhi University employee.

Dharanveer (55), working as a Sorter at the School of Correspondence Course and Continuing Education, University of Delhi, was arrested yesterday along with his three accomplices — Manish Agarwal (25), Naresh Kumar (38) and Mukesh Kumar (35), police said today. 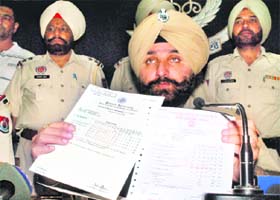 A laptop, two computers and several certificates were seized from the possession of the accused who was arrested after a decoy customer was sent to strike a deal for a fake degree.

The accused charged between Rs 5,000 and 25,000 for processing a fake certificate.

Meanwhile, in another case, police arrested a printing press owner in Trilokpuri area of East Delhi who was involved in fabricating and selling fake degrees and certificates of various courses ranging from BBA, MBA, MCA, BEd and M Com.

His arrest was also made through a decoy customer yesterday.