It has been more than 16 months now since the verification process of lawmakers’ educational credentials was initiated on the Supreme Court’s directive; yet none of the 60 legislators identified as fake degree holders have been held accountable.

“The Election Commission (ECP) had sent 22 cases to district police officers (DPOs) to register FIRs against fake degree holders. Only one MPA was arrested and he, too, secured bail within a few days,” ECP officials told The Express Tribune.

Sardar Ali, an independent member from the Khyber-Pakhtunkhwa Assembly was the only exception. DPOs had to file charge sheets in district courts in the members’ respective constituencies, but there has been no progress. So far, 11 FIRs have been registered with the police. 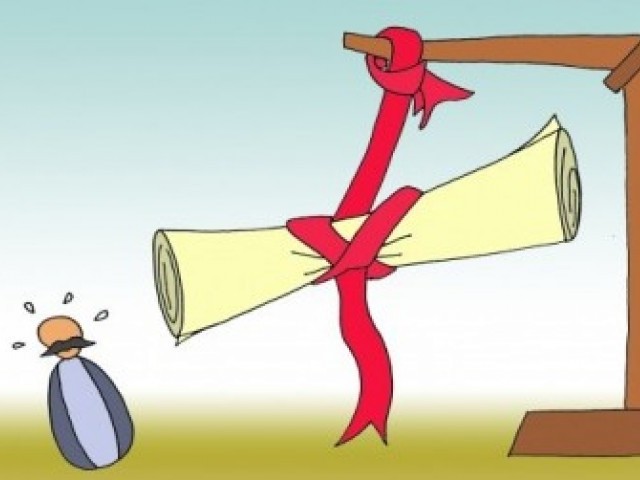 The Supreme Court had asked the ECP, last July, to verify the degrees of all lawmakers and had directed that cases of fake degree holders should be decided by district and sessions judges within three months. Interestingly, not a single FIR was registered in PML-N-governed Punjab. The party had initially been at the forefront of the campaign against fake degree holders.

Though the condition of possessing a graduation degree to contest elections for seats in the bi-cameral legislature was reversed by Supreme Court led  by former chief justice Abdul Hameed Dogar in April 2008, most legislators were elected in February that year when it was still in force.

A lawmaker found guilty of having a fake degree can face up to three years’ imprisonment and disqualification for five years under the corrupt practices clause in the Peoples Representation Act, 1976.

The Higher Education Commission (HEC) had identified 60 lawmakers whose graduation degrees were dubious and had sent their names to the ECP for further action. The ECP had formed a committee for initial hearing of these cases. According to ECP officials, eight of these cases were cleared by the commission after regular hearings, some were still being heard, while around 18 cases were declared sub judice.

Joint Secretary ECP Muhammad Afzal Khan who had headed the committee said the commission has now decided to directly send the cases of fake degree holders to district and sessions judges.

He said the ECP would need the services of lawyers to pursue the cases for which it would need to coordinate with the law ministry and provincial governments.

Another interesting aspect is that there are still around 150 lawmakers, including prominent politicians, who have yet to file their matriculation and intermediate certificates for verification.

After repeated reminders, the ECP and HEC both have opted to keep silent against the more powerful politicians.