Makerere University acting Vice Chancellor Venansius Baryamureeba has been accused of falsifying his academic profile and submitting plagiarised work to get accelerated promotion to full Professor. 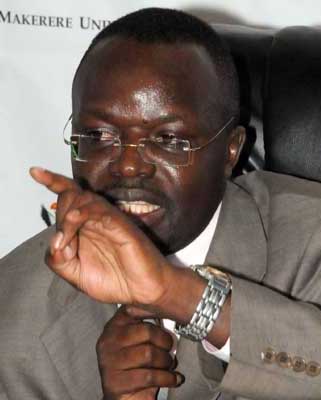 Prof. Eli Rwakishaya-Katunguka, the director for Graduate Studies, wrote to the University Council chairman Wana-Etyem on January 31, asking that Baryamureeba be stripped of the honoured academic title of Professor.

“I wish to submit that an investigation be carried out to find out how Dr Baryamureeba got promoted to Associate Professor and later to full Professor in the face of all glaring malpractices shrouded in lies and trickery,” he wrote.

It is alleged that the former Dean of the Faculty of Computing and Information Science never supervised 15 of the 28 graduate students he claimed to have supervised because there is no record to show he was officially assigned.

Under the university rules, for anyone to supervise a Master’s or PhD degree student, they have to be nominated by the Faculty’s higher degrees committee and get an appointment letter from the former School of Graduate Studies (now Directorate of Research).

That notwithstanding, Prof. Katunguka told Eng. Wana-Etyem that 11 of the students Baryamureeba presented to have supervised in fulfillment of requirements for his promotion were on Plan B study; meaning they could not be supervised and only did extended course for 3 semesters, ending with project/field reports examined internally and treated the same way as undergraduate reports.

The Vice Chancellor is also accused of masterminding his appointment to supervise and examine his wife, Ms Jennifer Angeyo Samali, enrolled on a Master’s degree programme in 2003, although the supervisor’s appointment was reportedly effected after Ms Samali submitted her thesis on: A dynamic framework for the protection of intellectual property rights in cyberspace.

This, Prof. Katunguka said, resulted in conflict of interest and ethical misconduct.

Council chairman Wana-Etyem last evening confirmed receiving the 14-page dossier, and Prof. Baryamureeba’s separate rebuttal, and said: “I have to analyse both letters and I will let you know what I come up with.”

In his written defence, the Vice Chancellor notes that he, on January 6, 2004, submitted three peer-reviewed papers to be elevated to an Associate and two years later; on September 29, 2006, he again submitted, for appointment to Professor, ten peer-reviewed book chapters.

Prof. Katunguka had said the so-called book chapters that the VC submitted were proceedings of a conference held at the CIT faculty in 2006, and Baryamureeba, as the Dean then, participated in editing the report he eventually turned to hand in for promotion as a Professor.

The acting VC accused Prof. Katunguka of churning out privileged university information in his custody to discredit him because the director of Graduate Studies allegedly harbours intentions to be appointed the substantive Vice Chancellor.

The University Council yesterday wrote to the Solicitor General for legal guidance on whether Baryamureeba’s continued stay in office since his appointment, in acting capacity, in 2009 is valid.

There, however, is a more serious allegations of ethical academic misconduct leveled against the VC

Prof. Katunguka alleges that Baryamureeba submitted a paper he knew had been plagiarised by PhD student Justine Kasigwa, dismissed from the university on October 11, 2006, to gain promotion to a Professor.

He said it was curious for the university to have accepted the plagiarised work to academically title Baryamureeba when it had rejected Dr William Ddembe’s attempt to be promoted based on the same work he, Ms Kasigwa and Baryamureeba claimed to have authored jointly.
Source: monitor.co
Tweet