After finding degrees of 31 ‘doctors’ and ‘dentists’ to be fake during verification over last one month, the Pakistan Medical and Dental Council (PMDC) has tracked down seven more individuals, including a woman, practising medicine in the country with fake or forged registration certificates. Ironically, some of them are serving in government-run health facilities.

Having struck names of these fake or forged degree-holders off the list of registered medical practitioners, the council has recommended strict action, which may be fine, imprisonment or both under the PMDC Ordinance 1962, by the executive district officers concerned against them. 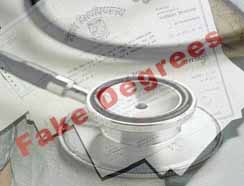 Since its foundation in 1962, the PMDC has a proper department where those wanting to practice medicine and dentistry in the country submit their degrees and certificates for verification. Once the degrees are verified, the council formally allows doctors and dentists to practice.

In September 2009, the PMDC moved beyond its role of verifying degrees on receipt. In a bid to ensure lawful practice of medicine and dentistry, it wrote to the heads of the country’s all public and private healthcare facilities to send copies of the degrees and PMDC registration certificates of the doctors and dentists working under them for free verification.

A special ‘Central Verification Unit’ was also put in place to check genuineness of the medical and dental practitioners’ credentials submitted. And as the degrees and registration certificates began coming in though very late, the unit got functional and commenced scrutiny of the documents received.

In the process, the unit found many degrees and PMDC registration certificates to be fake or forged, prompting cancellation of their holders’ registration.

There followed a request by the council to Federal Investigation Agency for investigation against these fake doctors and dentists, who claimed to have obtained degrees between 2000 and 2006.

And now during the verification of the degrees sent in by the government’s health facilities and EDOs, the PMDC has found seven individuals practising medicine at private and government facilities while using either fake registration certificates or those issued to legal medical practitioners.

Besides these cases, 42 doctors and dentists with suspicious degrees and registration certificates have also been found out. They have been asked by the council to re-submit attested copies of their documents along with two pictures for verification.

It is also learnt that the PMDC has developed an online degree registration system, which, according to an official, will help people know if doctors or dentists they consult are genuine and licensed and thus, checking quackery.