City police on Monday claimed to have busted a forged documents-making racket with the arrest of two persons and seized fake licenses and documents that could be used to acquire bank loans, college admissions and government’s low cost houses, among others.

The paralytic accused Dayanand Bansi (48), the mastermind of the racket, along with his two associates Parvez Makrani (32) and Dharamjeet Mishra (43), was booked on the charges of forgery and cheating, the police said.

Makrani and Mishra were held yesterday and remanded in police custody for three days, the prime accused has not yet been arrested on the health grounds, as he is suffering from paralysis, the police said. 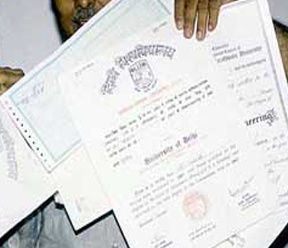 The gang has charged anything between Rs 5,000 to Rs 25,000 for every forged government and non-government document, said Joint Police Commissioner (Crime) Himanshu Roy.

Acting on a tip-off that Makrani and Mishra would come to Vikhroli to deliver certain bogus certificates to the customers, a police team, disguised as auto-rickshaw drivers, laid a trap and caught the duo, the police said.

During their interrogation, the duo spilled the beans, that resulted in a raid at the residence of Bansi in Goregaon, from where, the entire printing machinery, used for printing various bogus government and non government fake documents were recovered, the police added.

The preliminary probe suggested that the gang had provided some fake documents to some of its customers, who acquired loans from some co-operative banks, the police said.

The police will now conduct a probe to know as how many people obtained forged documents from the gang and for what purpose they used the papers.

The police also suspect that the gang’s customers had procured government’s low-cost houses by producing fake domicile certificates and even got government jobs.