The main accused Mukta Sharma (38) was serving as a director of a trust. Her husband Vikas Sharma was assisting her in the business. Kalpana, a Sector 23 resident, who was working as a manager at the sub-office and Naveed Anjum (32), an agent, have been arrested. In addition onf their clients have also been arrested.

The four-member gang, had been operating from two offices- a sub office in Sector 35 and a main office being run under the name of Sai Service Education in Zirakpur. 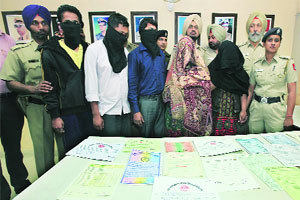 UT SSP Naunihal Singh said, “This is a separate module from the one busted earlier and had been running a parallel network in the city. The accused were arrested after decoy clients of the police reached a deal of buying a degree for Rs 28,000. Later an agent was caught red-handed while delivering the degree.”

“We have found that both gangs provided degrees from universities located in particular geographical areas. While the gang arrested previously, mainly focused on North and South, this gang provided documents of educational institutes located in Central and East India,” added the SSP.

He added that the scam needed a deeper probe as most of the degrees were not caught in verification which pointed towards them being authenticated at a later date. Police have also found out through middle men in Delhi, that degrees in two universities were being authenticated. The places in Punjab, from where the accused had got the fake stamps prepared, have also been identified.

The accused have also disclosed the names of some clients to whom they had supplied fake degrees. The correspondence of the mail between the clients and the company were also being verified. Police have identified 18 persons who bought degrees from the gang which was busted on Monday. One of the accused has been identified as Balraj Singh, a resident of Tarn Taran in Punjab. He had allegedly procured a fake Panjab University degree for getting a study visa for UK as his visa for France had already been rejected.