“Are you ready for school?”

With a night job and three kids, Denise Richardson knew that going back to high school or taking the GED would take more time than she had.

So she went on-line and found what looked like the perfect solution: for a few hundred dollars, she could take what she thought was the GED Test on-line, and if she passed, get her diploma.

“It was like a perfect opportunity and so that’s where they got me.”

But when she then tried to enroll in a local technical college, they were suspicious. “We took a look at it, attempted to call the 800 number she provided and of course it didn’t work.”

Turns out, the test and diploma were fake. And Denise is not alone.

The real GED Testing Service says thousands of people have also reported getting taken the same way. “If you’re not coming in person to one of our official testing centers, it’s not the real GED test! And it’s not likely to be recognized by employers or colleges.”

Now, the GED Testing Service has filed a lawsuit against what it calls a network of 13 web sites, some already shut down, that allegedly used the GED trademark to offer fake tests and diplomas. 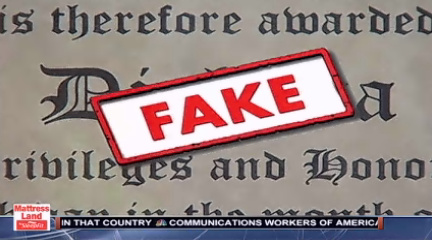 There are plenty of potential victims. One in five adults in America, 40-million people, lack a high school diploma. With unemployment at 13.7% for that group, 800,000 people take the test every year, hoping to go to college or find a better job.

The better business bureau has issued its own warning: “If you need a GED, you can’t get it on-line with just a few test questions and a couple hundred bucks.”

“…Here I tried to go back and better my education and it gets thrown in my face.”

Back in Wisconsin, Denise Richardson took and passed the real GED test.

“So you can see the whole picture…”

Today, she’s in college. Hoping to become a pharmacy technician.

The defendant who’s named in the lawsuit is reportedly in Pakistan now. Meanwhile, the website and the 800 number associated with Denise’s case, have been redirected to another diploma website, that doesn’t claim to have any U.S. Accreditation.