Education embezzlement tops the list of resume fraud being practiced in today’s job market. These days employers prefer candidates with advanced skills and specific educational degrees or certifications, this is the main reason for applicants to falsify their academic record just to fit into employer’s criteria.

This trend is seen on the rise in the past few years as education fraud cases can even be seen on the front pages of newspaper. An insight into the matter revealed the intensity of problem stating that two-thirds of college registrars confirm that they have been approached to verify falsified education credentials, including those obtained via diploma mills. 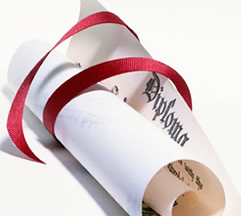 Society for Human Resources Management (SHRM) has categorically enlisted education among the top five items which every employer must verify. According to SHRM more than 53% of job applicants falsify information on their resumes, another finding reveals that one out of four candidates misrepresents his educational attainment. ADP Screening Index shows that employment, education and credential reference checks disclose 45% manipulation in applicant’s information. In another finding by Wall Street Journal, 34% of all application forms contain misrepresentations about the applicants’ experience, education, and ability to perform essential job functions.

The world renowned body of fraud examiners, Association of Certified Fraud Examiners (ACFE), said in its report that 41% of applicants lie about education. Federal Bureau of Investigation (FBI) in America affirms that there are about 500,000 people who claim college degrees they never earned.

There are many ways one can forge his actual credentials, a close analysis highlights some of the major falsification trends as how people tend to manipulate their credentials.

At this point you might be thinking of it as impossible to point out any falsification in educational credentials at the very instance of seeing it. But it actually is not that rocket science, you just have to be bit skeptical-cum-curios and use some common sense, and you can easily point out a red flag. Here we add to your knowledge some commonly seen red flags.

Educational fraud and falsification is likely to result in grave damage to the reputation of a business along with hiring cost of replacement, employee productivity gets less, you become vulnerable to damage of property and life and even expose yourself to legal obligations.

According to officials from the Federal Trade Commission (FTC), the Department of Education, and the Office of Personnel Management (OPM) bogus credentials can compromise your credibility — and that of your organization. When you place an incompetent person in a position of responsibility, you actually risk your organizational stability as that individual’s actions can bring harm to your company. Hiring a person who is dishonest, about mentioning his qualifications, exposes your organization and colleagues to potential damage, and if the bogus degrees are brought to light, you risk embarrassment.

What Is The Solution?

The solution to this problem is not that hard to find, keeping in view the above mentioned points you get an insight to what might be the case. Just go ahead to verify it online, online education verification is one of the most inexpensive, easiest and fastest ways an employer can reduce the risk and cost of making bad hiring decisions.