By Luke Salkeld and Colin Fernandez

A university registrar offered forged degree certificates to women in exchange for spanking sessions to satisfy his sexual fetishes.

Karl Woodgett, 37, told two African women that he was working on a ‘pain management study’ before taking them to a hotel room where he filmed himself smacking and caning them.

Woodgett, who was senior assistant registrar at the University of Bath, initially paid the women for their services in cash but later offered them fake university qualifications instead. 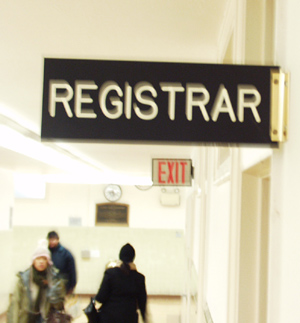 Yesterday, after he was given a suspended jail sentence, it emerged that he also starred in videos on sale on a website that specialises in ‘African spanking videos’.

Woodgett first began producing fake degree certificates for relatives of his Cameroon-born wife while working at the University of Surrey, Bristol Crown Court heard. The certificates can be useful to illegal immigrants.

As a registrar responsible for examinations and awarding students with their qualifications, he forged certificates for Delphine Kah’s mother, stepfather and sisters, whose fake degree subjects included media studies and international services.

‘He did not want Kah for sex, but to indulge his spanking fetish with her because she had a black bottom,’ he said

The marriage broke down, but the couple remained friends and discussed setting up a ‘mail order’ business together under the name ‘KK’s Crooked Certificates’.

They made no financial gain from the enterprise, but Kah was scouting for potential customers, and the couple referred to ‘Karl and Kah’s Crooked Certificates’ in emails, the court heard.

Woodgett proposed charging from £500 for an upper second class bachelors degree to £1,000 for a masters degree with distinction, said Mr Ward.

Later, Woodgett moved to the University of Bath where he borrowed a colleague’s login details for a degree database and managed to add bogus names to be approved by senior officials. He also managed to obtain blank degree certificates.

Then in March 2008, he met two women from Cameroon, who were living in Bath: Elsie Neh and Mbone Kemba.

Mr Ward said: ‘To satisfy his sexual nature he introduced himself as “Dave” and told them he was conducting a “pain management study”.’

Woodgett indulged in ‘consensual’ spanking and caning sessions with them at a hotel. Woodgett, 37, who worked at the University of Bath (pictured) at the time, initially paid the women with cash but later offered fake university qualifications, a UK Border Agency investigation discovered

He filmed the sessions and paid the women for their time. The father-of-one later discussed the possibility of paying them with bogus university degree certificates to advance their careers.

Woodgett was eventually arrested when staff at Kah’s employers, Camden NHS Primary Care Trust in North Londegreedon, intercepted her emails and their plot was uncovered.

The UK Border Agency was alerted because it was feared that a sophisticated immigration scam could have been operating.

Yesterday, Woodgett, who now lives in Ewell Minnis, near Dover with his parents, pleaded guilty to conspiracy to make false instruments – university degrees – and two counts of possessing articles for the use of fraud – two bogus certificates from the University of Bath.

He was sentenced to nine months in prison, suspended for 12 months, and ordered to carry out 200 hours’ community service.

Kah, 31, from London, pleaded guilty to conspiracy to make false documents and was sentenced to four months in prison, suspended for 12 months, and ordered to carry out 200 hours’ community service.

Judge David Ticehurst said the documents were not used to assist illegal immigration, and Woodgett and Kah had made no financial gain from their actions.

But he said: ‘This is a clear breach of trust. It goes right to the root of what universities are about.

‘If they have administrators such as you who are prepared to falsify documents, then the whole purpose is undermined.’

Woodgett lost his job after his scam was discovered.

Anna Vigars, defending, said her client, whose father was in court, had suffered ’embarrassment’ and ‘humiliation’ since his arrest.

In one still from the ‘African spanking videos’, Woodgett, wearing a shirt and tie can be seen beating a naked woman.

One of the videos, on sale for £25, is entitled Bribery and Corruption. It declares that ‘Cherice’ is beaten for being involved in corruption.

Another, costing £40, is called The African Way and stars ‘ beautiful 24-year-old Cameroonian Elsie’ – believed to be Elsie Neh.

Last night, Woodgett’s mother said: ‘He is not coming home today. He has had a horrible day and an awful year.’