If you don’t have the time, inclination and, more importantly, the money to go to university in Manila, you can still get a degree. It will cost you between $US10 and $US60, it will take about two hours to complete and it will be fake.

Welcome to “Recto University,” the name Manila mockingly gives to the strip of document counterfeiters that openly ply their trade between Claro M. Recto and Rizal Avenues in the Philippines capital. 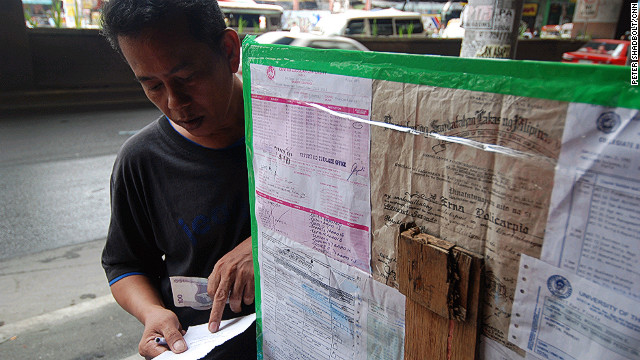 Located a stone’s throw from Manila’s university district and, somewhat ironically, Manila City Jail, the counterfeiters of Recto can run off a university testamur, any type of diploma, a job reference and, more worryingly, a pilot’s license and a seaman’s certificate in a matter of hours.

“Today business is not so good,” says a hawker sitting beside a makeshift sign displaying fake diplomas, driver’s licenses and job references that can be bought for as little as 500 pesos (US$11.50).

“If we do five documents a day, we’re doing well,” he says smiling broadly. “Sunday is our best day, because people start class or work the next day. Term time at the universities is much better for us than the semester break.

“Our business is tied to the academic year,” he says.

While degrees, licenses and identification from the Philippines are the counterfeiters’ strong suit — and locals say they can even source testamur paper from the year you graduated for added authenticity — they will attempt any type of foreign document.

Could they do a Green Card, for example, or anything with a hologram? The man turns to a fellow hawker next to his sign and, after a brief exchange in Tagalog, both nod emphatically.

“We can do anything if we’ve got the original,” he says. “It depends how much you’re willing to pay.”

For students in Manila, the strip on Recto is a one-stop shop for term papers and end-of-year assignments.

“I once went to Recto with five other classmates and we paid to get term papers,” said Cecilia Rohas, a former student at Polytechnic University of the Philippines. “I needed 30 pages, double spaced, on the Philippines revolutionary movement under the Spanish and, sure enough, I got 30 pages, double-spaced, all with a bibliography at the back.

“I was too busy studying for the end-of-year exams to do the term paper. Everybody does it,” says Ms Rohas.

These days, she says, the operators on Recto have globalised operations, providing academic texts to order online.

“It’s becoming a good line for people in Manila that want to make a living by writing,” she adds. “I guess because of the high level of English in the Philippines it’s a good fit.”

While other ‘diploma mill’ operators on the Recto strip operate openly and in full view of the law, the stallholder stands nervously to attention when two police saunter past his sandwich board.

Crackdowns have become more frequent since Manila Mayor Alfredo Lim, nicknamed “Dirty Harry” for his tough stance with the national police, ordered a clean up of the ID mills several years ago.

The stallholders on Recto rarely do the forgeries themselves, acting simply as runners to forgers who do the counterfeiting behind closed doors.

In October, police raided one of the country’s most audacious scams; an entire bogus government department that was collecting “taxes” using forged documents and IDs.

While police suspect the fake presidential agency may have had their own, more sophisticated, in-house forgers who used the latest technology to produce their paperwork and identity cards, the standard of street counterfeits is getting better.

The National Bureau of Investigation’s Questioned Documents Division is tight-lipped about the level of sophistication of the forgeries, but admits it’s a tough game keeping ahead of the counterfeiters.

“Are the counterfeiters improving? Yes they are,” says Carolyn Moldez-Pitoy, supervising document examiner with the National Bureau of Investigation. “The good part is that we are also getting better at detecting them and that dissuades the forgers.”