PESHAWAR, April 15: The University of Peshawar (UoP) has planned to streamline work of its examination section and improve procedure for issuance and verification of degrees to ensure transparency and check any sort of forgery by students, according to officials.

“We have proposed a system on the pattern of National Database and Registration Authority (Nadra) in which all particulars of the candidates are properly recorded. This will effectively put brakes on cheating by the students,” said Rasheed Khan, controller examinations of the UoP. 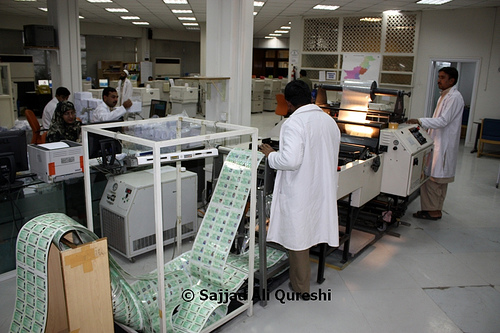 He said that the university might need a sort of collaboration with the Nadra besides equipment and trained manpower for implementation of the new system.

About 18 months ago, the varsity had started printing of candidates’ pictures on detailed marks certificates and degrees to discourage cheating by candidates, but the system has not fully worked because the candidates often want to change their
pictures after issuance of degrees and DMCs to them.

Under the new system, the varsity wants to introduce Nadra-like system and take pictures and record other features of the candidates like fingerprints at the controller’s office to help prevent issuance of fake degrees and DMCs. “Every month we receive about 2,500 degrees for verification in which about 12 emerge to be fake. Under the present procedure, it takes much longer to verify the degrees annually,” he said.  On government’s directives, all the departments have been sending degrees of their employees for verification and it becomes difficult for about 16 staffers of the degree section to carry out the task.

“Majority of our about 60 staffers have to stay in the office even after duty hours due to load of work. Recently we have requested the administration to appoint 14 more staff to cater to the workload,” he said. A few months ago, 14 employees were transferred from the examinations section, but their replacement had not been provided, he said.

Apart from issuance of degrees and DMCs after checking of records, the staff conduct about 180 examinations annually in which 200,000 candidates take part from the whole province, he said.

Mr Khan said that the secrecy section maintained a data bank of students’ computerised national identity cards, which had helped in checking double admissions at the same time in any of the departments.

“The vice chancellor has agreed to put in place the system for recording features of the students. Initially, it may create problems as students seeking registration with the UoP would be required to travel to Peshawar to follow the laid down screening procedure, including their images,” he said.

The controller said that they had been receiving dozens of applications from students requesting that they wanted a new photo shot from a different angle on their degrees though the pictures already on their degrees were provided by the candidates themselves.

With the new system, this problem would be resolved, as the candidates would have an opportunity to approve their photographs before being printed on degrees, he said. Mr Khan said that checking of 20,000 admission forms received from people appearing in BA/BSc examination remained pending for shortage of staff. The examinations will take place in May.