Don’t get trapped by Degree mills or fake institutes

ADegree mill issues diplomas from unaccredited universities, which may be legal in some states but are generally illegitimate universities. These are usually called fake institutes. Their purpose is to make profit by illegal means and thus spoils the lives of many immigrants. There are numbers of Degree mills who are banned by respective countries.

There are many fake online degree mills which are churning out thousands of fake degrees in the country. Though strict fraud laws and higher education regulations have been set up to identify these diploma mills, many unaccredited and low-quality colleges and universities still flourish. 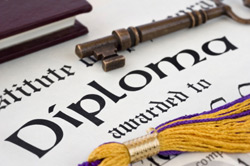 Fake online degrees are useless and are shear waste of money. They will be validated as fake, wherever you use them.

Distance education is gaining popularity at very fast rate to attain an undergraduate and graduate certification or professional degree with the help of advanced technology of Internet. More universities are offering online degree programs. It has become popular due to the flexibility it offers and you do not have to discontinue your existing job to take up higher education. You can study at your own pace and schedule. With the popularity of distance education, another problem has cropped up and that is the increasing number of fake online degrees offered by diploma mills.

Let us first talk about those countries that are listed of having such diploma mills. Australia, Bosnia and Herzegovina, Canada, China, Denmark, Finland, Germany, Hong Kong, India, Ireland, Malaysia, Mexico, Netherlands, New Zealand, Nigeria, Pakistan, Philippines, Portugal, Romania, South Korea, Sri Lanka, Sweden, Switzerland, United Kingdom and United States all these countries have strict laws against such false diploma mills and according Wikipedia all of them had been reported to had at least one of such institutes serving in wrong. Presently some these have been taken care of while others are still running away from the jurisdiction.

Tips to check whether an online degree is fake one or from a legitimate source:

1. The online college must have an.edu designation.

2. Don’t get attract towards their interesting sites.

3. If any of these sites are asking for money to get registered online then they are fake sites.

4. Try to gain more knowledge about those universities which are not recognized. So, you can easily find out the false one and good one.