The order makes it harder for the schools to engage in deceptive practices.

Military families are often easy prey for “diploma mills” that have helped win for-profit colleges and universities a bad name because of their practice of aggressive and deceptive targeting and marketing. President Obama and First Lady Michelle Obama traveled to Fort Stewart in Hinesville, Georgia, on Friday where the president signed an executive order that would make it a lot harder for those institutions to take advantage of soldiers, veterans and their families and the easy availability of GI Bill tuition assistance. 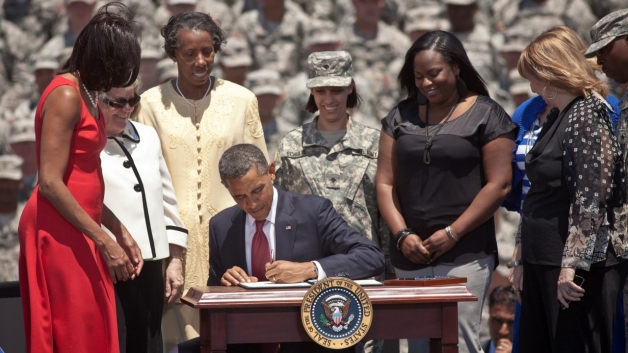 “They don’t care about you; they care about the cash,” the president said, citing bad practices such as coercing students to take out high-interest student loans and falsely claiming they have job placement programs or that their credits are transferable.

“They’re trying to swindle and hoodwink you,” Obama said. “We’re putting an end to it.”

Provisions in the order include requiring colleges that participate in the Defense Department’s tuition assistance program and Veterans Administration education programs to provide clear information about their qualifications and available financial aid. They also must provide students with the Consumer Financial Protection Bureau’s Know Before You Owe financial aid form.

The VA is going to trademark the term “GI Bill” so institutions can’t use it on their websites to mislead prospective students into believing that their programs are government-run or connected to the benefit’s system. The order also cracks down on aggressive and sometimes dishonest recruitment practices and requires schools to provide data about how much of their revenue comes from military and VA programs.

“We’re going to strengthen the rules about who can come on post and talk to service members,” Obama said. “And we’re going to make it a lot easier for all of you to file complaints and for us to take action when somebody is not acting right.”

Between 2009 to 2011, eight of the top 10 institutions receiving Post-9/11 GI Bill benefits were for-profit colleges and more than 50 percent of the students at six of them never earned a degree.

“This is about making sure you succeed, because when you succeed our country succeeds,” Obama said. “It’s that simple.”

BET National News – Keep up to date with breaking news stories from around the nation, including headlines from the hip hop and entertainment world. Click here to subscribe to our newslette