Police in Gyeongggi Province have booked two Chinese brokers and 18 students for faking documents to enter Korean universities and are widening their investigation to find more such cases.

The 20 people were booked without detention.

The Chinese students, none of whom are qualified to attend university in Korea, paid 7 million won ($6,192) to 18 million won to each broker for a fake high school diploma and school reports, according to the police. 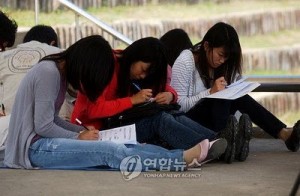 A broker surnamed Gang received 7 million won from a Chinese surnamed Jang and helped her get admission to a language program at a university in Cheonan.

The police informed the universities and local immigration offices of their violations.

The police are now extending their investigation to detect further illegal admissions in colleges, universities and graduate schools.

In 2007, 35 Chinese who illegally entered universities in South Jeolla Province were expelled to China. And 36 colleges and universities were penalized for lax management of foreign students by the Education Ministry in 2010.

The number of foreign students is expected to hit an all-time high of 100,000 in 2012, according to the ministry.