High school seniors are getting ready to graduate this month and finally get their diplomas. But a Houston company with an office here in San Antonio is offering a diploma by using a Texas law that allows parents to home school their children.

“I was having a difficult time reaching the teachers and finding out where the problem is,” says the mother of a troubled teen who asked not to be identified.

This mother was so worried her 15 year old might not get his diploma because of academic and disciplinary problems, that she looked into homeschooling for her son. 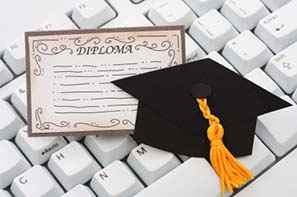 Schools advertise all over the internet, suggesting you can get a diploma quickly. Including this one called Marque Learning Center, which has an office in this building near Highway 281 and Loop 410. So the mother, along with our Trouble Shooter producer, headed in undercover to see how this school could help.

“I’m actually running a $99 special right now. And that takes care of the enrollment, tuition, work book, processing, the diploma and retesting,” said the Marque employee.

He tells us all the student has to do it fill out this take home test. And told the mother its okay for her to help him fill it out. “It’s accredited by the state of Texas, so he can get into any college or university with it,” he tells them. But only if the student is under 17 years old.

The Trouble Shooters had this mom’s 10th grader take the test, but to test the validity of the business he intentionally failed several portions of it. We also made sure he did not complete all of the sections of the test. Two weeks later when he got the news, he’d passed and earned his high school diploma. This transcript says he never scored below a “B” in any course over four semesters of work. But remember, our student never did four semesters of work, he was only given one take home test and he failed it.

“That’s ridiculous. He just, and we just, essentially paid for a diploma,” said the mom whose son took the Marque test.

Here’s how these diploma mills work.They claim to operate under the Texas home school law which says any parent can elect to teach their kids at home – and no state college can deny them admission.

The Texas home school coalition says these companies are not a legitimate home schools because there is no instruction by the parent.

In an email, Marque’s owner defended his business writing; “when students under the age of 17 enroll with Marque their parents must accompany them and the student receives instruction from their parents.” But our student was only fifteen and his mother was never told by this Marque employ to do any instruction.

Marque’s owner also questioned our failed test. “Unless you have proof that the exact same test that was so called failed and incomplete was actually the test turned in…Then I will address the situation to the processing department.”

The Texas Education Agency says it has no jurisdiction over Home Schools, even those that do not follow the law.

You can read the entire email from Marque here:

Unless you have proof that the exact same test that was so called failed and incomplete was actually the test turned in (by proof I don’t mean your word or a small example video) then I will address the situation to the processing department. As far as we know, someone could have switched out tests before turning it in and/or reproduced a diploma to reflect Marque’s name.