diplomafraud June 20, 2012 0
By Melissa Repko
Southern Methodist University officials say they will not press charges against a Dallas woman who allegedly forged a diploma and staged graduationfrom the Dedman School of Law.The university sent Michelle Fyfe, 43, a cease and desist letter on June 14, telling her to immediately stop claiming a degree from the university or risk legal action, said SMU spokesperson Kent Best. 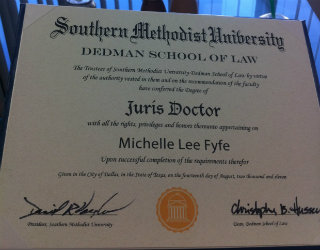 Fyfe’s attorney confirmed the letter’s receipt on Monday and said Fyfe would abide by it, Best said.

“If something else happens, we’d look at it again and consider further action,” he said.

Fyfe and her attorney did not return requests for comment.

The matter came to the university’s attention when someone filed a report with SMU police. The person, whose name has not been released, claimed that Fyfe had produced a fraudulent law diploma and transcript.

Coworkers and friends said Fyfe also staged graduation in a room at the Park Cities Hilton in Aug. 2011. The hotel confirmed that the room was reserved under the name of an event planner who was hired by Fyfe.

Photo: Beaux Seabury, a coworker of Michelle Fyfe, said she showed off a fake law school diploma from SMU.