A judge has found a former Wisconsin inmate guilty of running a diploma mill from behind bars. 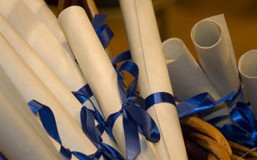 Prosecutors accused Shong of coaxing his fellow prison inmates into paying tuition to a distance-learning institution called Carlingford University, telling them the school was chartered to issue degrees from its London campus. Investigators, however, determined the school isn’t chartered in the United Kingdom.

Shong had argued he thought the university was set up properly and didn’t intend to cheat anyone. His attorney, Jeffrey Brandt, declined comment Tuesday.