Diploma Mill Degrees Too Good to Be True

Earning a college degree can be an expensive and time-consuming process. The average time of completion for a bachelor’s degree is 4.5 years, and the average cost of tuition per semester is almost $7,000, according to the U.S. Department of Education’s (DOE) College Affordability and Transparency Center. Unfortunately, full-time employees or parents who want to advance their careers may not have the time or the money to earn a degree. But what if there was another option? According to some schools, there is. 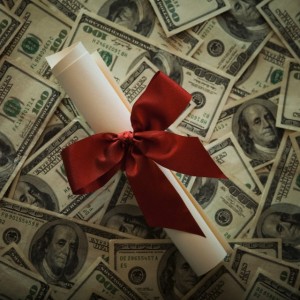 Some universities claim that you can obtain a college degree almost instantly and for a fraction of the cost. Instead of spending years toiling away on research projects and studying for exams, these schools say you can earn academic credit for the work experience you already have. If this sounds almost too good to be true, that’s because it probably is.

That’s because these schools are diploma mills, or “illegitimate schools or organizations that promise to issue diplomas or degrees that aren’t worth the paper they’re written on,” said Monica Russo, the Better Business Bureau (BBB) Houston and South Texas manager of investigations and media relations. Diploma mills confer degrees without having the proper credentials, which come in the form of accreditation: the status assigned to a school that signifies their academic programs meet a certain standard. It’s assigned by regional or specialized accreditation agencies that are typically recognized by the DOE. The purpose of it is to give employers and other educational institutions an assurance that an individual has the knowledge and skills that are acquired by successfully completing an academic program.

However, diploma mills claim their degrees are valued the same as those earned from accredited universities. To find out more about diploma mills, I called Olford Walters University (OLWA), a suspected diploma mill that I was referred to in another conversation with a sales representative from SpeedyDegrees.com. Posing as a student who was seeking a master’s degree in communication, I asked the university representative if the work experience degree, which he offered for $550, would be valued the same as a master’s degree from a more traditional college. His response was: “(The degree) is not just a piece of paper you will be purchasing. You will be able to use it to get a job or to pursue higher education opportunities.”

He added that his organization was nationally and internationally accredited, although he ended the phone call when I asked him about the name of the accrediting organizations. According to OLWA University’s website, the school is accredited by the Global Accreditation Council for Online Academia (GACOA). However, the GACOA is not recognized as a valid accrediting agency by the DOE or the Council for Higher Education (CHEA). Additionally, neither the GACOA nor OLWA University list a physical address on their website. This is in spite of OLWA’s claim that it operates in six continents, including America, Europe, and Africa.

Consumers should be aware that though an organization may claim it is accredited, that doesn’t mean the degree will be considered as equivalent to those earned from traditional universities. In fact, many diploma mills that claim they’re accredited hold such status from unrecognized institutions. “In a lot of cases, they will use a similar-sounding name to a more well-known accrediting body,” Russo said.

“What’s most important to people when they’re looking to get their degree is job advancement, and if you’re not getting a degree or diploma that’s issued by an accredited school, then it’s worthless. Employers won’t recognize it. Government agencies won’t recognize it. Post-secondary schools won’t recognize it, and that’s a big problem,” she added. “There have been several cases that people have lost their jobs because their degree wasn’t legitimate. Not only does it look bad to your employer, whether you did it intentionally or not, you’re also not qualified for the position.”

Jeffrey Fuller, the University of Houston director of admissions and student recruitment, added that his school typically accepts transfer credits only from regionally accredited colleges and schools. It may not consider a degree from a non-regionally accredited university valid if the student is applying for a master’s or doctoral degree program. Fuller added that the most important consideration for students when looking at what school to attend is if they are regionally accredited because that means the institution is respected and reliable.

A diploma mill will typically ask a customer to pay a one-time fee, sometimes $600 or more, for their degree. Since they claim to offer academic credit for work or life experience, they also typically require a customer to send them a resume. Once the customer submits the appropriate paperwork and pays the fee, they are then sent their diploma, which may arrive in a matter of days. But that diploma is pretty much worthless.

“You can get a degree in a very short bit of time,” Russo said. “Unfortunately, there are consumers out there who fall for this, and once they send in their money, there’s not much that can be done to get it back.”

Holding a diploma mill accountable is difficult because they may be based in an entirely different country, despite what their website may claim. For example, Belford High School, an online school that conferred high school diplomas and had several addresses listed in Houston, is actually run out of Karachi, Pakistan, according to KHOU. The anonymity afforded by the Internet makes it difficult to track down who operates these diploma mills, Russo explained.

“The problem that we found is it’s very difficult to find out who is behind these scams. There’s little that you can do to stop them. And there’s little recourse for the consumer,” she added. “It’s a growing problem with the ease of getting an online degree now. I think a lot of people that are looking at online degrees as a viable option, and that means they may be more likely to fall for a scam like that, and scam artists know that.”

Here are some other things to look out for when examining a specific institution: