A former owner of an online gaming business was charged at the Sessions Court yesterday with selling fake academic certificates from Universiti Sains Malaysia.

Lim Chuan Soon, 26, claimed trial to cheating a student, Wan Noorhafiza Wan Hussin, 23, of RM14,500 (S$5,700) in return for a bachelor’s degree in management of accounting from the university. 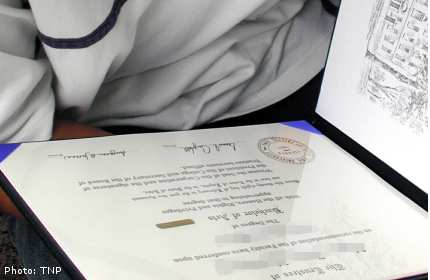 He allegedly cheated Wan Noorhafiza, who is an undergraduate in an architecture course in Universiti Teknologi Mara, at a Maybank branch in Persiaran Perbandaran, Section 14 here, between June 19 and 28.

Deputy public prosecutor Faten Hadni Kamaruddin offered bail at RM10,000 in one surety. Lim, however, pleaded for a lower bail as he has been held in remand since earlier this month.

Judge Aslam Zainuddin granted him bail of RM8,000 in one surety and fixed Sept 6 for mention.