Eminent members of society, some of whom hold ‘Tan Sri’ titles, have been implicated in buying fake degrees from a syndicate recently brought down by the Selangor police commercial crimes investigation department (CCID).

“Many of those involved are those with status in society,” Selangor Chief Police Officer Tun Hisan Tun Hamzah said. 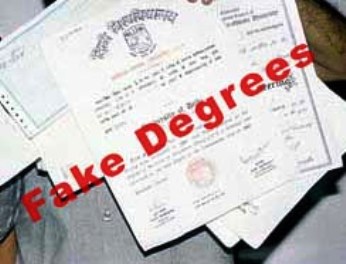 Speaking to reporters at a media briefing by the state police in Shah Alam today, Tun Hisan said some of those linked with the fake degree syndicate included ‘Tan Sris’.

Asked if this included politicians, he declined comment, saying investigations into the exact details were under way.

Tun Hisan said those who bought the degrees “know very well” that they were purchasing fake degrees and if they used those documents to get jobs or for whatever purpose, it involved the “element of fraud”.

As to whether those who purchased the fake degrees would also be charged, the Selangor CPO said police were considering that possibility.

However, he said that all those identified from the photographs and documents recovered as evidence from the syndicate will be called in for investigations.

Tun Hisan earlier announced that the state CCID had busted a fake degree syndicate operating out of an office in the Taipan USJ 10 commercial area in Subang Jaya.

Police estimated that the syndicate, fronted by registered business entity Jakri Education Group, had issued fake degrees to at least 525 persons and raked in more than RM5 million in fees.

A local male aged 37, a director and shareholder of the firm, was arrested in Cheras, Kuala Lumpur yesterday.

A woman aged 36, also a local and an agent for the syndicate, was picked up at the Jakri Education Group office in Subang Jaya.

Both suspects will be remanded until July 28, and are being investigated under Section 420 of the Penal Code, for “cheating and dishonestly inducing delivery of property”.

The male director’s wife, a lecturer, is also a shareholder in the firm but police have as yet found no connection between her and the illegal activities.

It recruited students online and through a network of agents, giving them the degrees after receiving payment without the need to attend classes, do assignments, sit for exams or complete research papers.

Convocation ceremonies would be held several times each year at prestigious hotels around the country, for which the ‘students’ are charged extra for the function, photographs and graduation robes, with foreigners recruited to play the part of ‘deans’ of the various universities from which the degrees were purportedly issued.

‘Some varsities exist only in cyberspace’

Some of the universities “only exist in cyberspace”, while others are real institutions but with no Malaysian operations or links at all.

Tun Hisan urged parents whose children had degrees from the Jakri Education Group, or employers with staff who had the same credentials, to verify their qualifications.

Meanwhile, Gerakan Youth secretary-general Dominic Lau ( left in picture ) called on the government to immediately draw up an action plan to stop fake certificates from affecting the credibility of Malaysian education in the workplace and abroad.

“Before this, foreign students abused their student ID cards and were often absent from classes. They engaged in vice, including robbery and murder

“Not only does this jeopardise our country’s reputation, but also the credibility of our quality of education. In turn, it will cause our graduates to be subjected to unreasonable questioning at workplaces internationally,” Lau said in a statement today.

A former associate professor at Universiti Teknologi Malaysia, who is now with UCSI University, Lau stressed the need for licences of institutions implicated in selling fake degrees, recruiting fake students and selling fake certificates to be revoked.

“The Higher Education Ministry must impose stern punishment by revoking the licences of those colleges that only aim at raking in profit and engaging in the selling of fake certificates,” he added.

Lau also suggested that the ministry promptly draws up a plan and mechanism to set up a nationwide control system to curb the fake degree issue.

The certificates and information of graduates from all Malaysian institutions could be uploaded on the system, so that employers could use it verify the authenticity of degree certificates.