I REFER to the recent reports on police questioning 40 individuals over bogus degrees and certificates bought through a company in Klang Valley. What is worst is that more than 500 high-profile individuals are suspected of having committed similar fraud. This is probably only the tip of the iceberg. 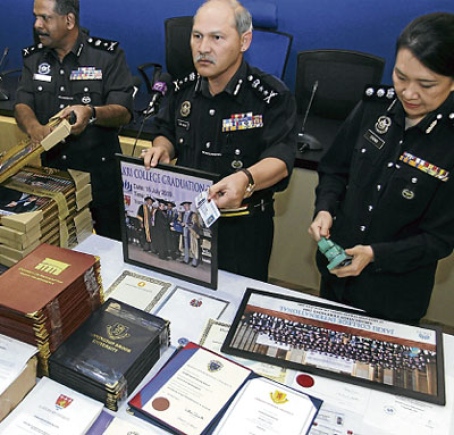 The business of selling phoney degrees is nothing new. It has been around for more than two decades. The expansion of the Internet, combined with the pressure to acquire degrees to move up the career ladder, provides a powerful motivator for fake degree suppliers and their clients.

Since the 1990s, there has been an increase in private colleges and universities, some with hardly any decent facilities, which churn out “graduates” whose knowledge, ability and skills leave much to be desired. This has been pointed out by regularly by employers.

Worse still, bogus degree mills, both local and foreign, “sell” certificates to anyone seeking the desired qualification which, to the unsuspecting eye, appears genuine.

From the 1950s to 1980s, obtaining a doctorate in any discipline, or for that matter a degree, was not only impressive but also rare. It brought with it a distinguished reputation of the individual having attained excellence in one’s chosen field of academic study.

Sadly, and I add to our utter shame, that’s no longer the case. The reports and findings on fake degrees revealed that for a mere “song” (about RM10,000), one can buy even a doctorate, without having prior academic qualification or undergoing the required number of years of study and research.

Most local and foreign “colleges” and “universities” — some run from shoplots or houses — as well as degree mills capitalise on some people’s desire for a competitive edge in their career.

The modus operandi: the quicker, the cheaper; and the less work involved, the better. The ploy is to convince consumers that they can acquire a degree in whatever field or level based on previous life and work experience.

In some cases, they attend a few lectures delivered by bogus lecturers, write an essay or a pseudo thesis based on samples or copy from a model, and presto, they have a degree of their choice.

Experts suggest that the fake degree business worldwide rakes in more than US$500 million (RM1.6 billion) a year.

Degree mills go to great lengths to create an illusion of reality and authority. Savvy marketing ploys and misleading information lead customers to believe that their “degrees” come from accredited learning institutions.

Even fake convocations are arranged at an additional cost, with an “academic head” coming from abroad to confer the “degrees” at a posh location.

There is an urgent need to come down hard on those who supply these fake degrees, their agents and affiliates in the country, as well as those who have acquired such fake qualifications and are holding high positions.

Some might claim they were duped into believing the validity of these degrees, but that is far-fetched and the lamest of excuses. Almost everyone involved, both the supplier and the consumer, is aware of the crime he or she is committing and must be brought to book.

In countries like Singapore, Thailand, the United Kingdom and the United States, making a false declaration in a resume or submitting a fake degree to land a job, as well as those responsible for facilitating such fraud face a hefty fine, or even a jail sentence.

And, of course, the fake degree holder is removed from the post.

The fact that the Higher Education Ministry and the police are investigating degree mills and fake degree holders is a step in the right direction.

But more needs to be done to eliminate these mills and weed out those who have, over the years, acquired fake degrees and are using them in various ways.

The accreditation of higher learning institutions, the quality of their academic staff and faculty, and the assessment and awarding of qualifications must be reviewed rigorously and regularly.

Those failing to meet the standards must be warned and duly terminated if improvements are not seen.

It is also important to review employees’ qualifications in the public and private sectors. Officials in the government and corporate sector should be trained to detect fake qualifications when interviewing or recruiting applicants.

Unless and until the issue of fake degrees is dealt with swiftly and decisively, without fear or favour, such an undesirable situation will discredit our education system and be a slur on the image of our graduates. The genuine ones, who have earned their degrees through honest and hard work, might be shortchanged.

And, most regrettably, we as a nation will be looked down upon.

This article was written by Rueben Dudley, Petaling Jaya, Selangor and originally published on nst