The business of “life experience degrees” took a blow when Pakistani businessman Salem Kureshi and his companies Belford High School and Belford University lost a $22.7 million federal class-action lawsuit earlier this year, but experts say the judgment will have only a small effect on what is a billion-dollar, international Internet scheme. 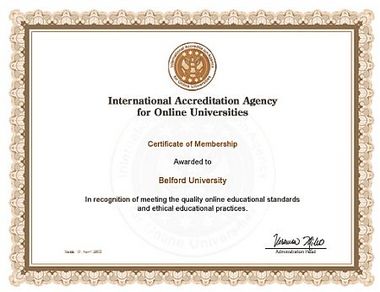 “Getting a GED can really help you start your life,” McCluskey, told the Flint Journal after filing her lawsuit in November 2009. “People who want to give you fake ones are saying they don’t care where your life will go. They’re just out for your money.”

The Better Business Bureau gave Belford University an “F” grade because it has received more than 200 complaints about the online university in the past three years.

“I’ve known for a long time that Belford was completely fake,” said George Gollin, a professor of physics at the University of Illinois at Urbana-Champaign and a former elected official on the Board of Directors for the Council for Higher Education Accreditation.

Gollin has worked for years with retired FBI agent Allen Ezell and John Bear, an authority on distance education, as part of a watchdog group that helps bust up what he calls “diploma mills and scams by con artists.”

“I went to the Belford website originally to apply for a political science degree and I got one based on my life experiences involving watching television and reading newspapers,” Gollin said. “I wanted to see how far it would go and ultimately I got offered a doctorate in thoracic surgery at Belford University based off of my life experiences.”

Ezell, an FBI agent for 35 years, co-authored the book Degree Mills: The Billion-dollar Industry That Has Sold Over a Million Fake Diplomas and for 11 years was the head of the FBI’s DipScam task force charged with disbanding diploma mills.

On Oct. 24, 2011, after nearly two years of fighting the case, Kureshi submitted a declaration to the court, which stated in part that “The lawsuit has become cost-prohibitive to continue to defend. As a result, neither Belford nor I will continue to defend this case and, on behalf of myself and Belford, I consent to a default being entered against myself and Belford.”

Prior to Kureshi’s declaration, Marc Newman and the Miller Law Firm P.C. withdrew counsel of Kureshi, claiming that he was not being honest to them about the facts of the case, according to court documents.

On Feb. 6, 2012, Judge Mark A. Goldsmith of the U.S. District Court for the Eastern District of Michigan entered an order requiring Belford and Kureshi to pay the plaintiffs $24,902.22 by April 6, 2012. According to court records, Belford and Kureshi failed to do so, which led McCluskey and her attorneys, The Googasian Firm of Bloomfield Hills, to file an order with the courts.

“We’ve been handling the case since 2009 and after three years we’ve nearly conclusively established that Belford is basically an Internet scheme,” said Tom Howlett, one of the lead attorneys representing the 30,500 plaintiffs in the case. “They’re a fake school with fake accreditation, a fake faculty and administration.”

On June 19, 2012, the court entered an order holding Belford and Kureshi in civil contempt for failing to pay the sanctions. As part of its contempt order, the court ordered Kureshi to transfer various Belford domain names to plaintiffs by July 16, 2012, unless Belford paid the sanctions prior to that time.

The court warned: “Failure to comply with this order will subject Belford and Kureshi to further sanctions including, without limitation, issuance of an arrest warrant and additional monetary sanctions.”

The following day, Kureshi was ordered to pay $22,783,500. The ruling, which reflected the approximate price of each diploma sold ($249 each), times the 30,500 U.S. students who purchased diplomas from Belford between 2003 and the time of the lawsuit, and multiplied by three, pursuant to damages associated with Racketeer Influenced and Corrupt Organizations violations.

Kureshi filed a response contesting the amount, saying that “Belford is not a sham and that it is not liable for breach of contract, unjust enrichment, or civil RICO.” The argument didn’t sway the judge, and he denied the request, granting the full judgment based on the evidence that was presented.

“This sort of thing happens all the time, but you don’t normally see lawsuits in this amount,” Gollin said. “I helped bring down Saint Regis University in Spokane [Washington], Belford and lots of other ones. There’s a lot of really ugly material out there, but unfortunately, I don’t think the plaintiffs are going to able to collect anything. He was lying to his lawyers, lying to the court, and I just would be curious to see if they get anything.”

Belford University’s current website claims that you can get your “desired degree that’s accredited, affordable and accepted all around the world.”

Jack Rooper, a spokesman with Belford University in Humble, Texas, declined to comment on the lawsuit. No other representative from the company was available to comment.

Howlett, representing the 30,500 plaintiffs, said that McCluskey was harassed following previous media interviews, and that she would not be available for comment. He also said that he was glad for the plaintiffs and that he was unsure of when or how money would be awarded.

“The process for collecting on the judgment and distributing the proceeds has yet to be determined,” Howlett said, “but the court will determine that process.”