Three people in Charlotte have been arrested for making hundreds of fake vehicle titles and registrations.

According to the North Carolina Department of Motor Vehicles License and Theft Bureau, inspectors arrested three people on Tuesday following a raid at three locations. 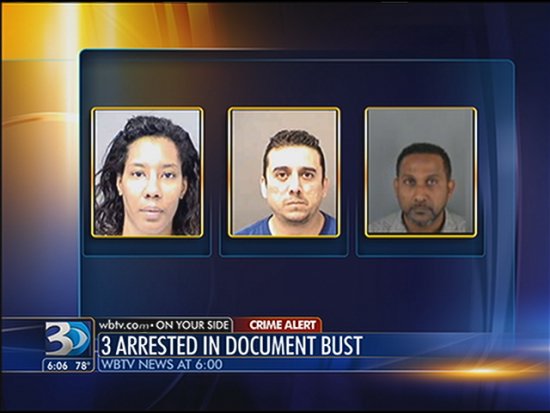 The investigation, which has been ongoing for two months, identified people who were obtaining assumed name filings from the Mecklenburg County Register of Deeds Office and using those fictitious business names to title and register motor vehicles, providing false information to DMV.

With the assistance of agents from the Department of Homeland Security and the North Carolina Secretary of State’s office, DMV inspectors arrested the three after serving search warrants at three different locations in Charlotte.

Felipe De Jesus Chavez, 33, owner of La Popular along South Boulevard, was arrested at the business and charged with possession of heroin, possession of counterfeit merchandise and two counts of selling prescription medication without being licensed.

DMV inspectors also seized title and registration documents and a license plate at the location.

A padlock on the door Wednesday surprised a few customers. Anivel Sandoval, who came to United States from Guatemala,  says he was disappointed to learn about the illegal activity and did not expect to shop at La Popular again.

He said he understood the need for people to drive, but he says there are other ways to get transportation. Sandoval would bike, ride the bus, or ask a friend to take him to work before he could get a license.

“That’s the only way you can survive over here, and to my opinion, that’s the right way,” he said talking about the need to follow the law.

Also arrested was Carisa Renee Barrett, 37. She was charged with title fraud, accessing government computers for fraud and notary fraud. Inspectors seized title and registration documents, notary seals, an N.C. DMV form and a computer at the location.

The three were transported to the Mecklenburg County jail.