Shabree Vest has always dreamed of going to college, but that dream has been put on hold. She was forced to drop out of high school during her junior year in order to get a job to support herself.

Immediately after Shabree dropped out, she started looking for ways to complete her high school education. That’s when she came across an online program. She said, “I took the test and passed the test. I got a diploma and the transcript.” 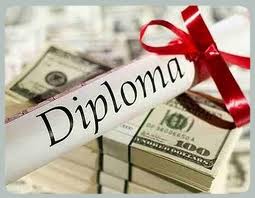 Shabree spent nearly $300 to get that diploma, but when she went to enroll in college, she found out it wasn’t worth the paper it was printed on. ” They said it wasn’t credible,” she recalls.

Patton says Shabree is just one of many students targeted by so-called online diploma mills. “They feel students are desperate and will do anything to get a diploma.”

Patton says students must do their research. There are ways to make sure a university or potential employer will accept your degree. “The first thing I would do is check to see if they are accredited,” says Patton.

The online program Shabree used looked legit.  She learned her lesson the hard way. Now, she’s studying to get her GED.  Patton says getting a GED is an excellent option. “Colleges now accept GEDs and most businesses do.”

Also remember, there are online GED programs that are not legitimate. We checked out the school Shabree paid.  The Better Business Bureau lists 70 complaints for Jefferson High School online. The school responded referencing the terms on its web site that explain Jefferson is not an accredited institution.