State banker gets the axe for using bogus degree

The state-owned Vietnam Bank for Agriculture and Rural Development (Agribank) dismissed an acting director of its branch in Ba Ria-Vung Tau Province on Thursday for using fake diploma and degree. 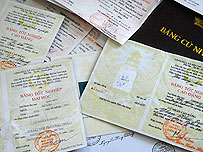 Nguyen Ngoc Khai, 52, was found using a fake high school diploma, a fake college degree and a fake English certificate as credentials for his job.

Khai held the post as vice director of Agribank’s Ba Ria-Vung Tau branch between July 2003 and June 2010. In July 2010, he was appointed as acting director of the branch

After Khai was detected using a fake degree, he was expelled from the Party Unit of Ba Ria-Vung Tau Province last month.

Provincial inspectors had previously concluded that while at helm of another Agribank branch in Xuyen Moc District between 1994 and 2003, Khai asked someone in Ho Chi Minh City to help get him a fake degree in politics.

He also paid VND1.5 million (US$71) to get an English certificate from a foreign language learning center in HCMC without taking any exams.

Khai had three different high school diplomas, all of which are fake, according to inspectors.

This article originally appeared on talkvietnam