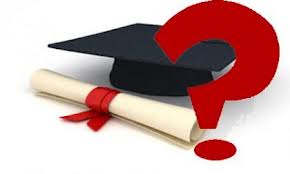 Talk focused on the issue of the non–existent universities which award fake degrees and some prominent figures in our society who obtained sham diplomas. In order to clear themselves of this accusation some of them put up their degrees for public scrutiny.

Dr. Abdulrahman Al-Haijan, ex-member of the Shoura Council and former Deputy Director of the Public Administration Institute for Research and Data, criticized those who repeatedly raised the issue of fake degrees.

He said these people made a big issue out of something that’s not important because the legitimately accredited institutions and official professional licensing authorities don’t recognize the credits and degrees or sham diplomas awarded by these unaccredited universities.

He said even when one is exposed, they will be out on the street and no one will hire them. He said this provides conclusive evidence that there is not a single person in the government or the educational sector that has a fake degree or bogus diploma. He said another factor that confirms this fact is that every government agency has its own tools and methods to help them to expose any fake degree or certificate.

He said the government has enough measures to ensure the authenticity of the degrees and diplomas of every single employee working in the government. He challenged anyone to come up with concrete evidence that there is one civil servant employed with a fake degree.

This article originally appeared on saudigazette