By Nail Khisamiev and Claire Bigg

With the winter exam season in full swing, students across Russia are toiling away on their term papers.

Some, however, are opting for the easy route and paying others to write their work — an entrenched practice that critics say continues to undermine Russia’s once-vaunted education system. 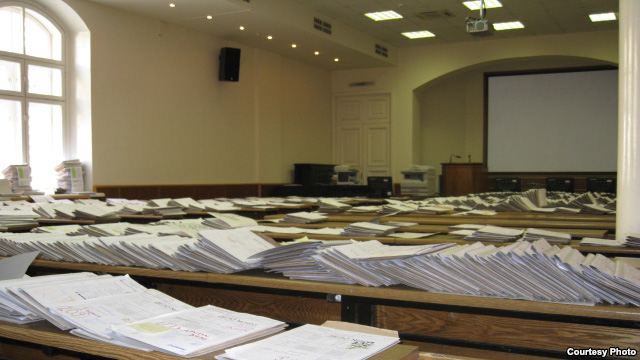 Laisan, a young woman based in Tatarstan, makes a living by ghostwriting student papers, theses, and dissertations on a range of topics. She says her work is popular among students and has earned her regular clients.

“Theses start from 5,000 rubles [$165]. But it depends on how much the person can pay, the price is agreed individually,” Laisan says. “I don’t copy anything from the Internet and I do my research in libraries. I care about my professional reputation, I don’t want to lose clients.”

In Tatarstan’s capital city, Kazan, the sale of university papers is so common that people like Laisan openly advertise their services on vKontakte, the country’s biggest social network.

Iskandar Yasaviyev, a professor of sociology at Tatarstan’s prestigious Kazan Federal University, says the practice severely damages academic standards. “This is widespread, and it turns the entire education process into a profanation,” he says.

Ania Giymatdinova studies Tatar philology and history at the same university. According to her, about half of her fellow students regularly hire “ghostwriters” to pen their papers. Most teachers appear to turn a blind eye to the scheme.

“Roughly half the students write their papers themselves and the other half seek help,” Giymatdinova says. “Among those I know, there are also students who buy their semester papers and theses. They are not stupid, they just don’t want to waste time reading books in libraries.”

What Can Schools Do?

Academic fraud in Russia is difficult to quantify. No official statistics are available, and both the Education Ministry and its Higher Attestation Commission, the agency that regulates the granting of postgraduate degrees, turned down interview requests for this story.

A number of universities have taken steps to tackle the problem, in some cases even expelling students caught plagiarizing or purchasing papers.

“Universities have their own mechanisms to combat this, and these mechanisms are effective,” says Ilya Rassolov, a prominent information-rights expert who heads the department of information, entrepreneurial, and commercial law at Moscow’s State University of Trade and Economics.

Former Arkhangelsk Mayor Aleksandr Donskoi is one of the few to face punishment for academic fraud.

“At my university department, we change titles and topics every year so that student papers don’t repeat themselves. We come up with titles that no one has ever used before us,” he adds. “And not every Ph.D. would be able to write a term paper on these subjects, let alone such a thesis.”

Rassolov says rising education levels and better control at universities mean academic fraud is on the wane in Russia.

A Kazan-based sociologist, Lilya Nizamova, sought to estimate the extent of the practice two years ago. The results, she said, were shocking — scores of students resorted to ghostwriters and more than 40 people were found to openly offer such services in the city.

When she sent her findings to the Education Ministry, Nizamova was told that the sale of university papers was a commercial issue that did not fall under the ministry’s jurisdiction.

Kazan University’s Yasaviyev, however, believes Russia’s flawed education system is much to blame for the rampant cheating. “It’s no secret that teachers are overburdened and have little time left for assisting students with their course work,” he says.

“As a result the students are under pressure, the professors appear at the last moment one week before the thesis defense, and many students are tempted to pay for a ready-made thesis,” Yasaviyev continues. “Students are not the only ones to blame here. This situation stems from the state of Russia’s education system.”

Advanced degrees obtained through purchased dissertations are also popular among top managers and officials, who see a new academic title as a status symbol.

A handful of officials have even been caught red-handed in recent years. Lawmaker Vladimir Burmatov was forced to quit his post as deputy chairman of the State Duma’s Education Committee last year after his Ph.D. dissertation was found to be heavily plagiarized.

Plagiarism is a punishable offense under Russian law.

And in 2006, Aleksandr Donskoi, who was then mayor of Archangelsk, was handed a one-year suspended sentence for allegedly purchasing a fake diploma. But his prosecution was widely seen as Kremlin retribution for his presidential ambitions.

On the whole, academic fraud in Russia goes mostly unpunished.

President Vladimir Putin himself faced scrutiny over his 1997 degree from the St. Petersburg Mining Institute after a U.S. researcher claimed that 16 pages from his dissertation were lifted almost word-for-word from a study published by two University of Pittsburgh professors.

For those wishing to hold a degree without actually enrolling in university, buying a fake university certificate is also an option.

Fake diploma peddlers, once a fixture in Russian subway stations, have since gone online. On Profdiplom.com, one of the myriad of slick websites offering forged diplomas, a postgraduate degree goes for roughly $1,000.

According to some estimates, about half a million fake diplomas are sold each year in Russia.

Quirky stories involving forged diplomas occasionally gain media attention, such as the fake engineer who checked airplane engines for an entire year at a big Siberian airport  before being exposed, or the teacher who was named the best teacher in Russia in 2007 and was later found to have purchased her degree.

In an unprecedented case of mass forgery, more than 70 workers at a high-security Sukhoi airplane factory in Russia’s Far East region were revealed in 2010 to have obtained fake engineering degrees from a local technical college.

Sukhoi, however, refused to fire the would-be engineers, arguing the offense was not severe enough to justify such a measure.

The factory assembles Su-27, Su-30, and Su-35 fighter jets, as well as Sukhoi’s latest model, the Superjet-100 passenger plane. The Superjet crashed last year during a demonstration flight in Indonesia, killing all 45 people on board.