The ‘Q’ Branch police have arrested four youths allegedly involved in siphoning off money using fake credit cards of foreign banks. The police suspect that they had withdrawn several lakhs of rupees through ATMs of various banks here in the last two years. 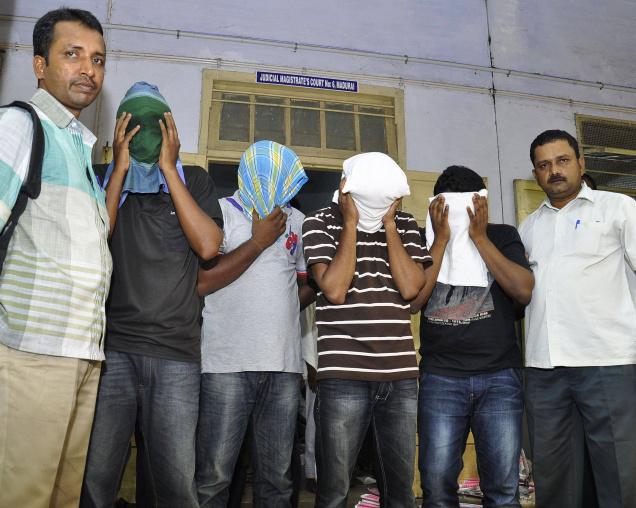 Those arrested were identified as B. Balaji and his friends S. Balamurugan, P. Madan Meeran and J. Suresh Pandian, of Anna Nagar. While Balaji, a diploma holder, is the alleged mastermind, the others just carried out his orders.

Acting on a specific input, the ‘Q’ Branch sleuths nabbed Balaji at Tirunagar on Saturday night. Interrogation revealed that Balaji got acquainted with some Sri Lankan Tamils in Chennai during his attempt to find a foreign job. Through the Sri Lankan Tamils he got to know one Mukundan in Canada.

The police said Mukundan used to send details of credit cards of foreign banks – the credit card number and their PIN number by e-mail. The gang used to make duplicate credit cards with a skimmer machine. The gang members were also supplied with blank credit cards.

“These youths used to withdraw money as directed from Canada. The withdrawn money was sent to Canada through a ‘hawala’ network. No details were revealed to the gang except the temporary identity of persons (to whom the money should be handed over), the colour of the dress they wore and the place where they could be met.

The youths were given specific time and account number of credit cards from which the money had to be withdrawn. “They followed this meticulously so that they could withdraw the maximum money from the account, before the account gets locked by the system,” the police said. The youths were paid 15 per cent commission for the illegal task.

As people who lost their money were compensated by the foreign banks through insurance, they did not lodge a complaint. The youths, all in their late 20s, used to spend their commission money on food and liquor.

The police have seized Rs 4.04 lakh, 269 credit cards, a car, three motorcycles, a laptop, a skimmer machine and five mobile phones from them. The youths were booked under various sections of the Indian Penal Code for forgery (468 and 471), cheating (420) and criminal conspiracy (120B) and under provisions of the Information Technology Act.

The accused were produced before a Judicial Magistrate who remanded them to judicial custody. A search is on for five more persons.