RAWALPINDI: After Ghulam Sarwar Khan whose National Assembly membership was suspended by the Supreme Court due to fake degree, another PTI stalwart met the same fate after a two-member Election Tribunal of the Lahore High Court (Rawalpindi Bench) here Monday declared Ayla Malik of PTI ineligible to contest by-elections. 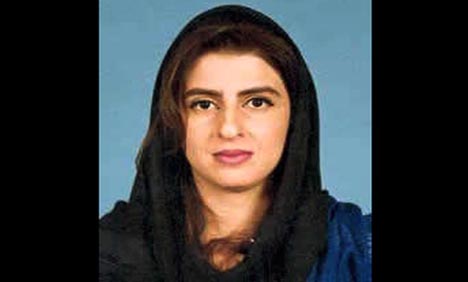 Election Tribunal comprising Justice Mamoon Rashid Sheikh and Justice Ayesha A Malik declared Ayla Malik ineligible due to her fake intermediate certificate. Ayla was an aspiring candidate for the National Assembly constituency NA-71 in the by-elections, the seat that was vacated by the Pakistan Tehrik-i-Insaf (PTI) chairman Imran Khan. A political opponent of Ayla Malik, Obaid Ullah Shadikhel had raised objections to the candidature of Ayla Malik alleging that her intermediate certificate was fake.

On the orders of the Election Tribunal, Rawalpindi Board of Intermediate and Secondary Education (RBISE) submitted reply before the court stating that they did not find any record of Ayla Malik’s certificate.

It is pertinent to mention here that a Supreme Court bench on July 19, 2013 had suspended the National Assembly membership of a PTI candidate Ghulam Sarwar Khan due to dubious educational credentials beside de-notification of membership of the two Punjab Assembly legislators Mir Badsha Qaiserani and Khawaja Mohammad Islam, after HEC confirmed that both parliamentarians possessed fake degrees. Another Supreme Court bench this month also disqualified a PML-Q provincial legislator Samina Khawar Hayat, for holding a fake degree.

The issue of fake degrees has affected a number of politicians and political parties. It was in 2002 when the former President Gen (R) Pervez Musharraf made possession of a degree essential for contesting general elections.

In election 2008 the condition remained the same but number of fake degree cases started emerging. Many cases were contested in courts and as a result many big names were exposed possessing fake degrees.