ISLAMABAD: The University of Punjab has formally stripped Pakistan’s former Education Minister Waqas Akram Sheikh of his graduation declaring his Bachelors of Arts (BA) degree invalid as the documents provided by the former minister for BA examination have been proven to be bogus, The News has learnt. 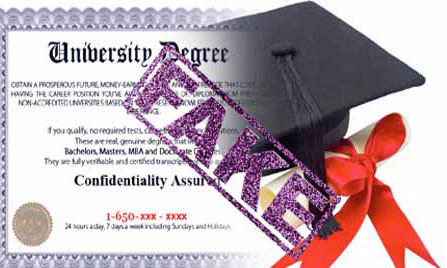 Sources said after the declaration of the university, HEC has also withdrawn attestation of former MNA’s BA degree. The move could end the political career of the former MNA who contested 2008 election on the basis of his ‘graduation’ degree. Legal experts believe Waqas could be barred from contesting elections for life under article 62 and 63 of the constitution which requires a legislator to be honest and sagacious.

According to a recent letter by the Punjab University’s controller examination Dr Liaqat Ali, a copy of which is available with The News, the former minister had failed to pass intermediate examination hence his BA degree is invalid. The university was responding to a letter by the Higher Education Commission (HEC) No 5-3/IIEC/A&A/2013/693 dated July 22, 2013. On the directions of the Supreme Court of Pakistan, HEC had sent letters to various universities to inquire about the status of the degrees of some parliamentarians.

“In admission form for Bachelor of Arts, Annual Examination 1997 vide Roll No 054216, the candidate informed that he passed intermediate examination from BISF, Lahore in 1995 vide Roll No 011097. However the candidate is shown fail in Statistics as per gazette of BISE, Lahore,” said the letter of Punjab University.

The letter also mentions the HEC’s correspondence with IBCC and Cambridge International Examinations (CIE) showing that A level certificate of the former minister was not genuine.

“Under all above circumstances, the degree is invalid, however litigation is still pending in court and the codal formalities for quashment of result at university end are hence pending.”

When contacted, Sheikh Waqas Akram termed it a conspiracy being hatched by the HEC chairman. “As an education minister I caught HEC chairman’s corruption and held him accountable for the wrongdoings in the commission therefore such dirty tactics are being employed by him against me for the last many months,” he said.

Sheikh Waqas said that as the case was sub judice therefore he was unable to comment in detail over the issue. He further said that he had yet not received any official correspondence of HEC or any other organisation in this regard.

Meanwhile, HEC has also written a letter to Waqas at his home address informing him that the commission has withdrawn attestation of his BA degree.

“HEC withdraws the attestation vide HEC ticket number 326448 dated 13 August 2010 made for your Bachelor degree awarded by the University of Punjab,” says the HEC letter.

It says the degree of Waqas was attested on the basis of his intermediate from BISE, Abbottabad and his A Level certificate from University of Cambridge, UK but later both were proved fake.