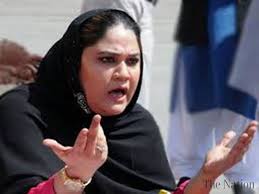 Counsel for the federation requested more time to argue on the case after which District and Sessions Judge Hamid Hussain Shah adjourned the hearing. Appearing before the court, Hayat submitted she was still a member of the provincial assembly and that she had had original documents on the basis of which she got elected to the legislative assembly this year, for the second time.  When the counsel for the federation contended her degree was fake, Hayat insinuated her documents were genuine. She requested the court to grant her bail. She submitted she was an honest lady and was not involved in any misconduct.

In his remarks, the judge observed it was not their concern what documents she had been elected on, the question was about her documents on the basis of which she got elected as parliamentarian in 2008.  The counsel for the federation insisted Hayat was ineligible to hold membership of the provincial assembly.

After hearing the arguments of the two parties, the judge accepted the request of the counsel for the federation, and adjourned the hearing till August 17. Supreme Court of Pakistan had disqualified Samina Khawar Hayat as a parliamentarian for possessing a fake degree, and the provincial election commission through a petition sought to penalise her for using fake academic credentials and declare her ineligible to hold any seat in the future.