No classes, no hassle, the advertisement on Facebook promised. And all for a fee of just US$199 (S$253). Though affixed with the Singapore Ministry of Education’s (MOE) logo, the Facebook ad leads to an external website called Global Accredited Degrees, which offers “100 per cent legal, accredited and original” degrees with “no exams” and “no coursework”. 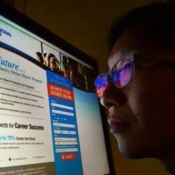 For US$199, you can get yourself a bachelor’s degree from one of the “top universities around the world”. Top up another US$26 and you have yourself a doctorate. After signing up for a degree on the website, The New Paper was e-mailed by Belltown University, purportedly an online university.

The “university” has its own website that looks genuine and has a toll-free number listed. But an Internet search of the faculty members revealed an identical list of faculty members on another online university’s website.

Responding to queries from The New Paper, MOE clarified that it was not associated with the website and company. But it prompted the ministry to alert the public about such fake degree mills.

In a post on its Facebook page on Wednesday, MOE said: “It has come to our attention that the MOE logo is being used without authorisation by ads on Facebook that claim to offer degrees approved by MOE.”

Authenticity The ministry also urged the public to check the authenticity of the degrees offered. More than a decade after degree fraud in Singapore first made the news, fake academic certificates are still easily available.

Just last month, following a crackdown by the Ministry of Manpower, 25 foreigners from Myanmar, India and the Philippines were charged in court for lying to obtain S Passes or forging certificates.

Twenty were jailed for four weeks and the rest served 20 days’ jail each as they were unable to pay court fines of $5,000.
In January, a Singaporean was jailed a year for using fake degrees and forged testimonials to get jobs in the human resource industry.

In an attempt to guard themselves against this trend, employers are asking recruitment firms to do checks on degrees.

Mr Joshua Yim, CEO of Achieve Group, said that there have been cases where a person’s qualifications could not be found in the records, but such cases are “very rare”.

Also, the workforce today is made up of people with diverse nationalities, and job applicants may be armed with qualifications from institutions that employers may not be familiar with, he added.

“The onus is on the recruiter or hiring company to conduct thorough checks on the candidate’s background and qualifications,” Mr Lee said.

The president of the six-month-old Singapore Association for Private Education, Mr Lee Kwok Cheong, urged Singaporeans not to be tempted by fake degree offers.

“The reality of life is that even if a student somehow fakes his degree, whether to further his studies or for work, his performance will show,” the education veteran said.

“Sooner or later, he will be found out even before entering the door. And he can be prosecuted.

“Even if he manages to fake his way through the door, he will be found out eventually.

“So just put in the effort to study and get your qualifications – not just the degree, but learn the skills. What you want is not just the slip of paper.

This article originally appeared on malaysia-chronicle