Muwafiq Al-Ruwaili, a member of the Shoura Council, has called for urgent measures to curb the phenomenon of fake certificates, which are obtained through dubious Web portals. 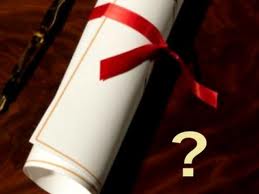 “We are trying hard to unearth the locations from where these fake certificates are being sold in the Kingdom. Raids were recently conducted in apartments in Hail and Qassim where higher degree certificates were being sold,” he said.
He said about 7,000 individuals in the Kingdom hold fake certificates, including officials in both the public and private sectors and consultants and trainers. All of them obtained the certificates from Web portals specializing in the sales of fake masters and doctoral degrees, Al-Ruwaili said.

He cited the case of one individual who received a fake doctoral degree from the University of Columbus through its president, who ran the business from a federal prison in the US while serving time for involvement in forgery cases.

The convicted American was arrested following a raid on his apartment, where a large number of fake certificates were also seized. Some of the seized certificates were ready to be dispatched to the Kingdom, he said.

He said that around five percent of Saudi women working in the training and interior design domains hold fake certificates. The US began the trend of selling fake certificates to the Kingdom through Web portals, Al-Ruwaili said.

He said that the Shoura Council recently passed a recommendation for the establishment of a national center for the attestation and documentation of post-graduate degrees.

Writer Hamza Lamzini observes: “New media and social media outlets have exposed the circulation of fake certificates through hashtags that have often named and shamed the holders of these certificates.”

Lamzini said he himself was approached by a mediator from America who was willing to provide him with a doctoral degree for $2,000.
“The southern provinces in America are notorious for selling fake certificates,” he said. Saad Al-Bazei, another Shoura Council member, said that the acquisition of such fake degrees should constitute a criminal act.