It was by chance that a reporter rode a taxi from Hamra to Salim Salam one afternoon and inadvertently overheard the driver on the phone bargaining to obtain an ID for his friend, who he said was a Syrian army defector. 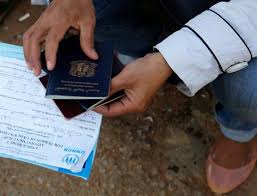 He said the money was ready, and asked when the materials could be picked up. When asked whether the documents being provided were Lebanese or Syrian, the driver said the latter.

“I have a friend who can provide real Syrian IDs and passports with whatever name you want from the [Syrian] Interior and Foreign ministries for $2,000 each,” he added.

Most people looking for false identity documents in order to travel obtain them through a third party, a high-level General Security source told The Daily Star. The security body has arrested “tens” of individuals for possessing false documents, including passports, visas and residency permits.

The phenomenon has been on the rise since the start of the Syrian crisis, the source said.

From the period of Nov. 16 to Nov. 24 alone, General Security personnel arrested 21 people for their involvement with false documents. Two were arrested for allegedly forging passports and six were caught attempting to use fake passports or visas to travel abroad.

“It’s been on the rise since the escalation of the Syrian crisis, and the refugee influx that came to Lebanon with it,” the source said.

However, Lebanese and Palestinians are also arrested for possessing false documents. “It’s not only a Syrian phenomenon,” he added.

“Most use them to travel elsewhere, so they can leave Lebanon, but some use it as a cover-up for terrorist activities,” the security source said.

“Some of them [get the document] to try and leave Lebanon for another country; others couldn’t get a visa so they try to get one [forged],” he said.

European countries, especially those that have laws against deporting illegal arrivals, are a popular destination for such people.

Forged documents may also be used to cover up terrorist activities, the source said, but he was reluctant to divulge how General Security goes about identifying these individuals, saying it was “confidential.”

There are two main ways that false documents are obtained. A valid document could be altered – by changing the name, date of birth, picture, or adding a visa stamp for example – to suit the identity of the holder and their purpose.

“These people have a valid travel document, but make changes to it,” said the security source. Alternatively, an entirely new document, typically a passport, could be purchased through agents working for illicit networks that in turn acquire them either by forgery or theft.

Details about the nature of the transaction are often uncovered during interrogations with holders of the fraudulent documents. Most carriers are apprehended at Rafik Hariri International Airport while attempting to board an outgoing flight, the source said.

Detectives follow leads uncovered from interrogations in an attempt to apprehend the counterfeiters themselves, but it’s not always that easy, and each case is different.

“Sometimes we don’t have addresses, only names. Sometimes the name provided is not real.”

“Most people obtain these documents from a third party linked to a network,” the source said. “So often, those arrested for possessing false documents don’t actually know who provided them with it.”

The price of obtaining such documents in the black market can range from $2,000-$10,000, the source said, with prices depending on the individual’s financial situation.

“Changing an existing document is cheaper than obtaining a new one,” the source added.

A female Syrian refugee living near Masnaa in the Bekaa Valley said it was fairly easy for Syrians to obtain such documents through third party sources. The woman, who asked to remain anonymous, said they usually range in prices from $700-$2,300 for a Syrian passport.

“There are specific people we know, who we can contact to get such documents,” she said, adding that she believed they were Syrian army officers with ties to the regime. Their market is mainly Syrians who support the opposition and don’t possess identity documents, and are afraid of being arrested if they applied in person.

The source added that she knew of a Syrian who successfully traveled to Sudan with a falsified passport obtained through this network.

“It’s the hope of many to travel to other countries,” she said. “Especially after the first batch of Syrians left for Germany, we had many people come to our registration center here [in Jnah] asking to be resettled.”

Germany agreed to temporarily resettle 5,000 Syrian refugees earlier this year who were selected according to vulnerability and need.

Russo said the agency had come across some cases of refugees who had falsified documents, but emphasized the number was “small.”

“We don’t know their motivations,” she said. “What we have seen in some cases are families who have not registered the birth of newborns, who try to get a certificate through other means.”

The agency has a UV-ray device that detects falsified documents.

Both the UNCHR and the General Security source agreed those caught with falsified documents were often victims themselves to a degree.

“These people paid for these documents,” the security source said. “They are guilty for this, but they are victims too. They lost money, and then they are obliged to go to prison.”

This article originally appeared on dailystar