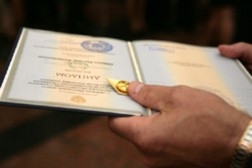 According to the official website of the Prosecutor General’s Office, Partskhladze entered the Open Humanitarian University at the age of 15 and graduated at 19.

Japaridze said that Partskhladze could not have left school at the age of 15. Moreover, the Law Faculty of the University was formed in 1992 and the official could not have entered it in 1991.

Tbilisi ex-Mayor Gigi Ugulava said on Monday that Partskhaladze had been sentenced in Germany. The prosecutor general gave a partial confirmation of the information.