Vusimuzi Donald Duke Khumalo told the court he was Mdunge’s English teacher in 1984 and 1985, when Mdunge matriculated from Ukusa High School in Hammarsdale. 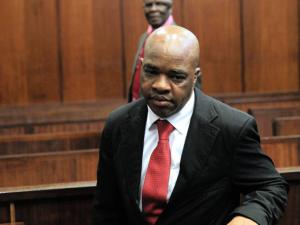 Mdunge is accused of fraudulently presenting a fake matric certificate when he joined the police. He faces three charges of fraud and one of uttering a forged document.

Khumalo, who is now a principal at a school in Umlazi, said Mdunge was one of about 30 pupils from the school who were handed matric certificates.

He said that although he was a new teacher barely older than the pupils themselves, he had been tasked by the principal to hand out the certificates.

Asked about the exam number on the certificate that the State alleges is fraudulent, he said he did not check the number, but the names matched the pupils who got the certificates.

When told by prosecutor Barend Groen that the State believed Mdunge had failed matric, Khumalo replied: “I dispute what is said by the State. I concur with the accused. What the accused has said is correct.”

He was adamant that he handed Mdunge a matric certificate and that the E aggregate that Mdunge achieved, according to the disputed matric certificate, did not reflect what he thought Mdunge’s abilities were when he taught him in 1984 and 1985.

Two of Mdunge’s fraud charges relate to his alleged presentation of the fraudulent certificate to the SA Police Service when he joined the police in 1987.

He resigned last year, after the allegation surfaced in September, and was arrested in October.

The third fraud charge relates to his presentation of the alleged fraudulent certificate to the University of SA to obtain admission for a National Diploma in Police Administration course.

In March a provincial education department official told the court the department had no record of a matric certificate for Mdunge, and the one Mdunge claimed was his had been “tampered with unlawfully”.

Mdunge’s trial was postponed to August 21.