Chico State University’s Director of the School of Education believes a Tehama County Superintendent candidate’s claims to have the equivalent to a master’s degree from the university is a misrepresentation of information.

Over the past 15 years, close to 500 students have received a master’s degree in education from Chico State University. 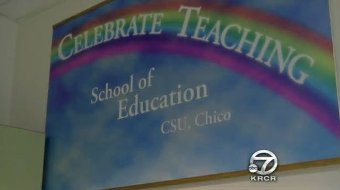 “Primary program for educational leadership and administration and we do take a lot of pride in that,” said Dr. Deborah Summers, Ed.D., Director of the School of Education.

Summers has served as the director for the past ten years, and has been in the field of education for more than 30.

“We need to preserve the integrity of our programs and degrees,” said Summers.

So when Summers heard that Charles Allen claimed to have a master’s degree from the department she was shocked.

“He does not have what I would consider to be an equivalent,” said Summers.

“It’s everything, that’s the difference between taking courses and being persistent and committed and achieving excellence within a certain discipline,” said Summers.

Since this is considered a rigorous program, Summers said it’s not uncommon for people to drop out. However, she has never seen anyone claim to have a master’s degree or equivalent when they didn’t in fact meet the criteria.

“Devalues the degree for all those who persist. In part, it is about the discipline, the persistence. It’s about the level of achievement and rigor and it makes me sad,” said Summers.

The election for Tehama County Superintendent is on June 3, 2014. KRCR News Channel 7 reached out to Charles Allen’s office for comment on this story, but have not heard back.